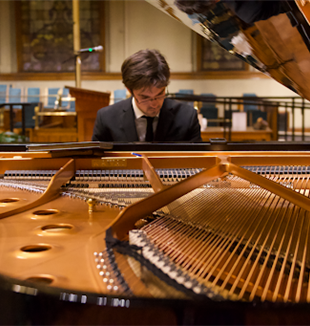 On Sunday, November 20th, the Colorado Communion and Liberation communities organized a piano concert in celebration of Fr. Giussani's anniversary. Pianist and composer Brian Billion played music by Schubert and Chopin. The concert took place in the beautiful historical venue of the Central Presbyterian Church, home of the Denver Philharmonic Orchestra, just two blocks from the Colorado State Capitol. About one hundred and fifty people attended the concert which we wanted to be open to everyone, free of charge. We collected donations for more than $1.2k. All of these are signs of a profound gratitude and curiosity that so many shared for the life of Fr. Giussani. We wanted to celebrate his anniversary by letting ourselves be educated again by him. Thus, we share here with everyone again the text which was read at the beginning of the concert, and through which Fr. Giussani told us with his distinctive sensibility how all reality longs for Christ.

[The below excerpts are taken from The Life of Luigi Giussani by Alberto Savorana, chapter 33]
Giussani’s father instilled a passion for music in his son at a young age [...]. But there was a particular moment in his youth that convinced him of the incomparable value of music for a human journey. It happened when he was in the seminary, and he heard an aria from Donizetti’s opera La Favorita. He called the piece so heart-rending that he felt it confirmed the existence of God.

He said, “I still remember the instant and the shiver, the heartache of the instant, when the fact of God’s existence became a significant piece of evidence in my life.” It was in his tenth-grade music class. For the first fifteen minutes his teacher would play records and explain the history of music. That day a 78 rpm record started to spin, and suddenly the voice of a very famous tenor from those days broke the silence in the classroom. With a powerful vibrato voice, Tito Schipa began singing an aria from the fourth act of La Favorita by Donizetti. Noble spirit, who in my dreams shone forth one day, but whom I lost, flee my heart! False hope and ghosts of love, be gone with it! At the sound of the very first note I intuited, with heartache, that what is named “God”—that is the Destiny for which man is born—is the endpoint of the existence of happiness. He is the happiness for which the heart is insuppressible need. In that precise instant, “for the first time, I understood that God existed, and therefore, nothing could be, if there was no meaning; the heart could not be, if there was not the endpoint of the heart: happiness.”

In that voice’s timbre Giussani perceived the evidence of something that was decisive for him: “The shiver of something missing—not in the beautiful aria of Donizetti’s romance, but in my life. Something was missing and no support, fulfillment, repose, or satisfaction would be found anywhere. And yet the heart demands there be an answer—it lives only for that. [. . .] I cannot say that in that music class in tenth grade I fully understood the heart of the question, but I had a foretaste. Like when you have a seed in hand, and you feel that it can grow up to be a great tree.”

Giussani always said that the entire growth of his religious awareness was influenced by that moment, and its development was always accompanied by music. After he became a priest, he imparted his musical sensibility first in the classrooms of Berchet high school and then, little by little, to the thousands of people who shared in his way of living Christianity, first high school students, then college students and, finally, adults. To this day Communion and Liberation begins all of its encounters, assemblies, and meetings by singing a song or listening to a piece of classical music, to help participants assume the proper mindset for approaching the event. Music and song were among the educational tools Giussani emphasized most strongly because of their capacity to recall the relationship of the person with their destiny and with reality. The collection of symphonies and concertos that Giussani appreciated and suggested to others grew over time, and he presented and commented on various passages from them on many occasions. He often used versions of them that were not easy to find on the market.

In the meantime, the success of the “Books of the Christian Spirit”, a series edited by Giussani himself, sparked the idea of doing something similar in the area of music. It was the late nineties, and the market for classical music was rapidly dwindling, with each album selling less than a thousand copies on average. When these statistics were relayed to Giussani he nearly cried; for him it was another sign of the impoverishment of people’s lives and the extent of the insensitivity and lack of education society had reached. Who suggested beautiful things to listen to anymore, he wondered aloud.

In spring of 1997 a new recording initiative was launched, not only new because of the artistic interpretations it proposed (some of which were long out of circulation), but above all because of the way the pieces were presented. The name of the series was “Spirto Gentil”, a direct reference to the experience Giussani had had when he first heard Donizetti’s aria by that name. Its purpose was to offer everyone the chance to encounter musical pieces, while keeping at heart the parameters of the ultimate meaning of existence and of history. This music had the power to call out unexpected surprises in its hearers and render tangible the surplus that every true artistic expression contains. As Giussani wrote on the first page of the booklet included with each CD in the series, “in music, in the panorama of nature, it is to something else that man pays homage, from which he expects something: he awaits it. His enthusiasm is for something that music, or everything that is beautiful in the world, has awakened within him. When a person begins to feel this, his soul immediately harks to await the other thing: even in the presence of what he can grasp, he awaits another thing. He grasps what he can grasp, but he awaits another thing.” 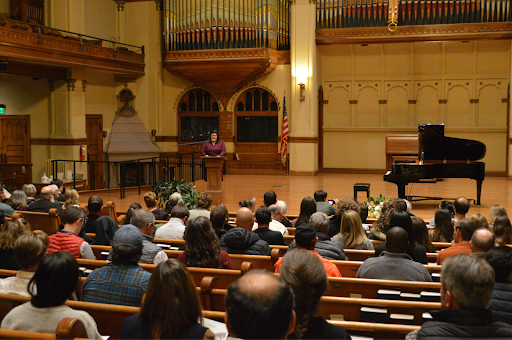 Giussani did not wish to propose a new aesthetic or stylistic analysis of the individual pieces; rather he tried to grasp the roots of all musical endeavors, embedded in the very lives of the great composers, whom he understood as witnesses to an extraordinary quest, a heartbreaking desire, or a sought-after peace.