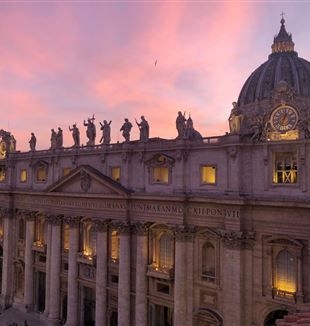 Drawn to make the pilgrimage to St. Peter’s Square on October 15, the 100th anniversary of Fr. Giussani’s birth, one hundred and thirty friends from across the United States gathered with several thousand others in St. Peter’s Square for the audience with Pope Francis.

Yet, even in the sea of people a deep familiarity was palpable. “Rome felt so familiar because of the many friends we met everywhere we went. Inside the churches, at the monuments, the CL presence was overwhelming and beautiful.” Simonetta traveled with her husband from New York and met dear friends by chance at the airport. She was particularly struck by the morning prayer in recto tono that truly radiated one voice, illuminating the unity among all present.

Nancy from California had a similar experience getting off of the train at St. Peter’s Square early in the morning. Taking notice of all of the strangers getting off the train with her, she recognized a feeling of closeness to them. “I continued to look at them, at my two friends traveling with me, at the world around me, and started to feel at home with a sense of belonging spreading inside my heart. I knew I was meeting Jesus again, now at this moment, the One who is capable of making any moment new.”

Many traveled to Rome alone, unsure of who they would meet along the way. “As I waited in the security line, I became acquainted with the man in front of me, Giorgio, living in Chicago, who is friends with Christina, a member of my school of community. He welcomed me to join him with his friends, so that I was not alone during the audience for the three hours. This was a grace. The audience was fantastic. I was surprised to see people standing on their chairs and was moved by their enthusiasm” shared Steve from Seattle.

Reflecting on the sacrifices made to go, Angelo observed that the real “sacrifice would have been to be unable to go to Rome.” For him, “to see our people together in Saint Peter's Square, the center of Christianity, completely filled with the people generated by the faith of Fr. Giussani” was a great surprise and provoked in him a desire to simply say “fiat”. To say “yes” to the responsibility entrusted to each of us – “a responsibility that causes joy and freedom!”

“In that Square, we were people looking for Christ, because that is the life-long activity of every person, whether aware of it or not. We were the people already healed from our struggles, divisions, presumptions. Over 60,000 people who decided to let Christ win over all of this. That was the reason for the gladness so evident in each person present” wrote Olivetta. Traveling from Ohio, Suzanne discovered that despite the ups and downs in her own life and in her belonging to CL, she was being called by Someone to be present for this historical moment. “Who else but Christ Himself could gather all of us to that particular place, in that moment? And He did it only for this one purpose: to glorify His name.”

Many experienced the paternity of Pope Francis. Sebastian from Minnesota wrote, “As my gratitude towards my father and mother grows as I get older, so does my gratitude to Christ for having given me a father (Pope Francis) who allows that the experience I encountered in the Movement may happen again in the present.”

Olivetta was moved that the waiting for the Pope began with asking for mercy. “Because, as the Pope later told us, we haven’t done all we could. Too easily we wasted our time in petty discussions while the Church and the world are in dire need of what we have been given. ‘There is much more that the Pope and the Church are expecting’ of us: in this way he reminded us of the specific task that Communion and Liberation is carrying to the Church and to the world.”

Paolo from New York wrote, “In time we will discover the full meaning of October 15th, if we are willing to do a personal and communal work, if we are open to listening to each other, if we are docile to obey the Church, seeking unity.”