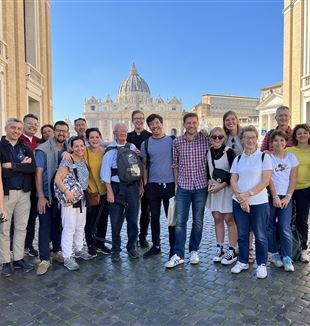 As the audience with the Pope began with singing, praying the Angelus, and listening to audio recordings of Giussani, I couldn’t help but look around St. Peter’s Square at all the people gathered to celebrate Fr. Giussani: the man who has guided us and shown us a path to follow. I was struck by the statues of the apostles and saints, thinking about the history of the Church. However, as I looked at them it became apparent that I do not have to go back in history to be inspired by those people because Jesus is giving me Fr. Giussani and this path to follow right now, exactly where I am. Why did Christ choose to give a high schooler in South Dakota the gift of Fr. Giussani and the gift of a particular people to follow? I don’t know, but He did! I was filled with gratitude to think that God had chosen this path for me. A path that has led to joy, truth, friendships, and beauty. He truly gives me good things – He is the life of my life!

The rest of the day was spent following friends around the city, eating too much gelato, and singing with people that had come from all over the world. To put it briefly, it was a taste of Heaven on earth. The joy that radiated was tangible and it was clear that I was being given a great gift. Praise God for this life to live, this path to follow, for Fr. Giussani!

These were the words that we were singing while waiting for the Pope, which moved me to tears. They describe what happened in me and among my friends on the day of the audience.

I belong to a people, a people that He has given to me to walk to Him. Through this belonging, I believe and I can see, and therefore the world can believe and see the Truth, the Beauty, and the Love that we all ultimately desire. The days leading to the audience, the walk to Saint Peter’s Square, the prayers, the songs, the witnesses, and the words of the Pope - all was and is His unconditional love that tells me: “Do not be afraid, do not waste your time… I am here: look at me!” My heart is full of gratitude for the history of a people generated by the encounter with the charism of Fr. Giussani. I ask and beg to remain simple and humble before what I have heard and seen on October 15 and the responsibility that Pope Francis entrusted to our community so that my entire life be “una cosa sola con Lui perché il mondo creda! [one thing with Him, so that the world can believe].” 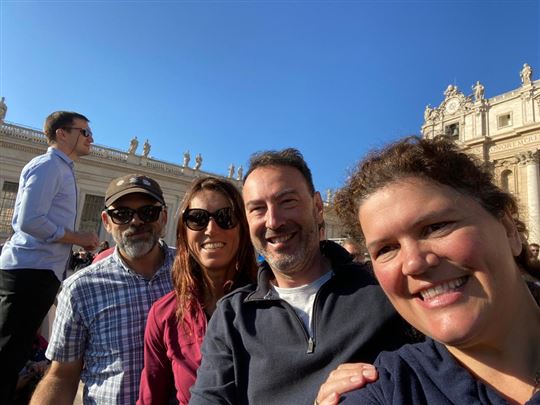 I was moved that while in Rome, with so many things to see and with invitations from Spanish and Italian friends, I had a need to spend time with our friends from Florida. I see them often yet still I felt the need and this struck me.

I think the need was born out of the realization that our being together in Rome affirmed the origin of our friendship. I wanted to walk this pilgrimage with them because they are part of my journey. At the same time, seeing all of these people on the same path as me, all there for the same reason as I was, following the same Someone, was very moving. In a strange way, I felt very much at home in that piazza. Especially when we sang La Strada; it reminded me of this journey that began about thirteen years ago for my husband and I.

I flew out on Thursday from Denver to attend the audience with the Pope in Rome and flew back on Sunday. It was totally worth it, and I would do it again with no doubt. It was a day full of joy generated by the gratitude for the life of Fr. Giussani, who introduced Christ to me and many other dear friends, making it possible for us to belong to the Church.

The experience of that day showed me one more time that there is no greater joy in life than that of being called and answering “yes”. And yet, my initial “yes” to Pope Francis’ invitation to gather in Rome to celebrate Giussani's 100th anniversary was cold, like a logical conclusion to an analysis of what my life should be all about. But then an unexpected “yes” came from three friends from my group of School of Community: “we are going to Rome”. My own “yes”, which could eventually have appeared to me as the fruit of a moral coherence, became a “yes” to a mysterious attractive Presence, which continues in history not merely as the outcome of human fidelity.

Once back, one of them asked me: "how do we go back to our normal life?" No! Not how, but what is life? With the words of Paul Claudel in The Tidings Brought to Mary: “what worth does life have except to be used and given? Why be tormented when it is so simple to obey?”

The journey leading me to Rome to celebrate the centenary of Fr. Giussani’s birth was an eighteen-year trek that started after moving to Chicago, IL. I was looking for a faith community and a friend mentioned CL. What I thought would be a small faith community turned out to be a deep well of spirituality. Every small step I took with the CL community gave me the strength I needed for life’s journey. Standing in St. Peter’s Square was a moment when I realized every encounter, no matter how small, was an important building block to my faith. This faith sustains us for the difficult road we travel in life and joyful moments like this event in Rome.

I was diagnosed with cancer of the tongue a few years ago and this required all the strength from God and use of everything I had learned up to that point to live the struggle in a meaningful way for myself and my family. I connected with a school of community that included members from all over the US and I discovered that the responsible for my group, Suzanne, was also a tongue cancer survivor. We met in St. Peter’s square last Saturday amongst the huge crowd of 60,000 pilgrims. It was a truly joyful moment to share with someone who had accompanied me through hard times. I cannot wait until the next encounter!