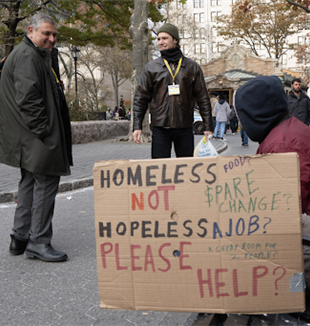 I started One City Mission at the end of 2017, driven by the desire to make the streets of New York a place of meaningful human relationships. A couple of months later, I met Ed and Martha, who decided to accompany me on an evening visit to three unsheltered friends living under the Manhattan Bridge. Over the years, one by one, we have had thousands of encounters involving about a hundred volunteers over time. The pandemic seemed to have put a stop to the mission, but instead, we discovered that our restart was full of new modalities and surprises.

Soon after the lockdown ended, I received a call from Lucia, who I did not know and who lives with her family on the Upper West Side. During the lockdown, the mayor of New York, following the nightly closure of the Subway, decided to host the homeless in some hotels in the Upper West Side, Midtown and in the Bowery. In these last two areas of the city, the residents have always lived together with the homeless, but not in the Upper West Side. There, a situation of confusion and scandal was created among the inhabitants of the neighborhood, who were not used to sharing with people in this state of need and often with mental problems. Lucia had a different perception. Even her four-year-old daughter asked her questions and worried about them, so she asked me for help to extend the work of the mission into her neighborhood. So, as the city became increasingly violent and many decided to move, Lucia involved her friends Alice and Enrico, and together we decided to risk a presence; to start a friendship that is the beginning of a new way of relating and experiencing the city. Over the years, we have found ourselves making friends with a group of people in need who gather in Verdi Square, at the intersection of 72nd Street and Broadway. The method of the mission is to offer simple hospitality: a coffee, a soup, a chat, a relationship repeated over time to overcome reciprocal indifference, an opportunity to rediscover the sense of self-dignity in the guests who live on the street who are often ignored, or worse, seen as New York City’s plague. Instead, we meet and respect others as they are.

Early last month, Charlie, who lives in Greenwich Village, asked me for help. Washington Square Park is one of the busiest places in our city. For two hundred years, it has been a gathering place for street artists, political demonstrators, tourists, passersby walking their dogs, families with children, and students from New York University. Since the lockdown, the square has become less safe due to the presence of drug dealers. The sanitation situation is also concerning, and New York's famous rats seem to like the ecosystem very much. Several homeless people use the square as a home due to the ease of access to the park's toilets. Charlie, who lives in the area, is concerned about the material and social degradation of the neighborhood. Thus, we began an attempt at One City Mission Community Point, the fourth weekly meeting place for people in need in New York.

On the second visit, our first after the Papal Audience on October 15, due to a misunderstanding about the gathering point, I lingered in the parking area while two other friends were already at work arranging the hot drinks. When I went to meet up with them, I was surprised to find them together with two policemen. The situation was a bit tense. Upon my arrival, they told me that there had been a not very friendly discussion between the police and one of our guests, which led to all the others leaving before the situation could escalate to a detention. The police, who saw me arriving as if nothing had happened carrying folding tables and boxes of cookies, came to me and asked what I was doing. I explained a little and offered them a coffee, which they didn't accept. They told me that it was okay to continue. After a while, one of my friends complained to me about the police, who didn't seem willing to leave, probably discouraging others from approaching. Instead, I was happy that the mission could also be there for those two officers in their thirties, who were there doing their job. Even if I had gone there just to meet them, it was worth it.

In the meantime, our guests were watching the scene from afar, and attracted by the hot drinks, they decided to risk having the police confront them again. They started approaching one after the other until they became about twenty. Among them was also the friend who had caused the initial incident. Thus, we found ourselves creating this strange congregation of drug dealers, police officers, volunteers, homeless people, and NYU students who could not resist a free coffee. We all spent an hour together, interacting on various levels, something certainly unusual in New York. The police officers watched us dumbfounded because we were at ease in the situation, the others looked at us displaced, because we treated everyone, even those considered adversaries, with the same cordiality, passersby observed us attentively trying to understand. Michael, a poet who has lived on the street for twenty years, was also there for the first time. He told me about his work as a poet, describing it as a mission to inspire young people. I proposed that we meet again one of the next times to listen to his poems. He was enthusiastic about the idea and told me that he would immediately get to work and, for the occasion, he would write a poem about One City Mission and our encounter. 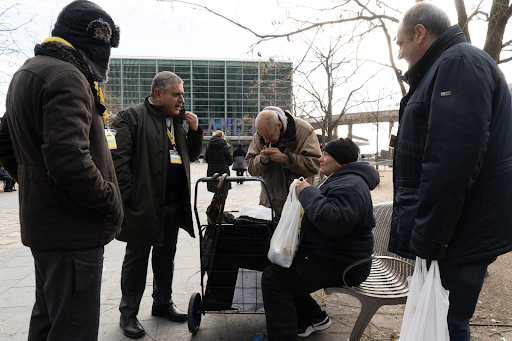 When it was time to go home, we dismantled the tables. The initial tension had vanished. I saw the police officers leaving, and all the others thanking us and asking us to come back soon. We all participated in something new, a way of looking at each other that went beyond the hostility and indifference with which the evening had begun. We had discovered a new horizon, perhaps even a small prophecy of peace as Pope Francis on October 15 had asked us to be.