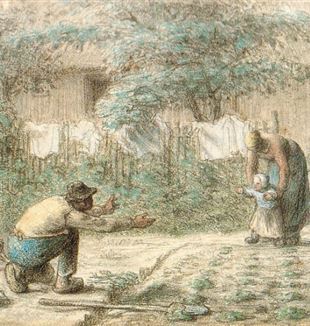 It has been a really tough period. After 4 months of my father's death, I still need to process it, but between work and my family it looks like I have no time for grief. We came back from Christmas vacation and we went to see an exhibit: The Miraculous Eucharist made by Carlo Acutis. In my mind I thought (because I can be very cynical) “here we are, another Catholic and boring exhibit, I am not sure I can handle it.” But I went.

There was a zoom call as an introduction of the exhibit with Carlo’s mom. It was amazing. I am not the type of person that gets super excited about things, especially this year, but the call left me with something undeniable. First thing: long way to go before my kids will be saints (just kidding); second: why does this lady want to spend time with us? And while she was talking I found there was something true in that lady – I was at peace while I was listening to her. And it does not happen often. I did not pay attention to the exhibit too much that day, I only understood what the exhibit was about. It tells us all about the miracles that happened throughout the world with the Holy Host. In some instances it would begin to actually look like flesh and blood and other times it was so powerful that it stopped the war, separated the water in a river, and fed a saint for thirteen years. All that has happened since 750AD. How ignorant am I? I did not know anything about it. So I started thinking about the meaning of the Mass, about my faith, about my mom who, since my father passed, has a daily appointment with Jesus. I was scandalized by how small my faith is, but it did not paralyze me. Instead, it made me want to tell everybody about this discovery. So with my husband and a group of friends we decided to bring the exhibit to the parish where our six kids go to school and where I work.

I asked the principal what she thought and she surprised me. She was super excited and she even invited her friend to talk to the kids about Eucharistic in general. I went, too, and I almost dissolved into tears when she talked about the Eucharist in such a way that I could understand how lucky I am that this Someone cares about me. That Someone loves me so much that He gave his life for my salvation. At that moment I wanted the whole school to be able to see what I understood.

I organized a zoom call with Carlo’s mom for the kids. It was a Friday after a crazy week at work. The whole school was in the gym for the zoom and she showed up five minutes late. Those five minutes I was really stressed, I prayed, but it was not in my hands anymore. Then she came and it was beautiful. But still I was questioning myself. I asked myself a bunch of times, “Why? Why do I need to do that?” I think because when you receive so much and you are grateful for it, the only thing you can do is to share it with others.

The week when the exhibit was here we went every night to help out with tours, sometimes with the kids and sometimes without, and we saw people that walked through the whole exhibit crying. I saw my kids able to present in front of the class the miracle that they chose. I went to Adoration and it made sense to pray and spend time there. I went to confession, I started praying for my father, for my family. And I felt a pain when people did not care about something that instead moved me so much, but again, I still repeat in my head: it is not in my hands.

Life is still hard, the pain is still there – even more than before probably – but when I say how my heart was moved, I can say it was worth it, or as I was saying giving a tour of the exhibit: It is amazing how from a sin or a sinner God is able to bring out something great.