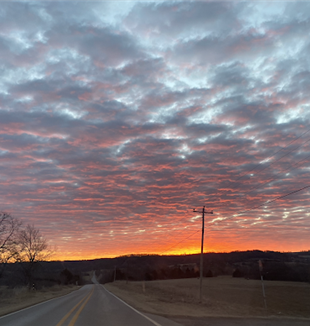 I first met the Movement just over four years ago while I was in college in Kansas - within the span of a month I had met a few friends, a Greek tutor, and a wild new professor who all seemed to be speaking about their lives and our studies in a way I had never heard before. Through patient invitations I was slowly brought into this beautiful life; a place steeped with His Presence which allowed us to live our days with attention and gratitude. I found a home with these people, accompanied by Fr. Giussani.

In the spring of 2021 I was looking at jobs in places where my friends and CL were present, but I was wrestling with understanding where Christ was inviting me to love and to build the kingdom. Surely it must be somewhere that I could continue to live this life with others in the Movement! When a priest friend called me from home and offered me a job at the high school that I had graduated from in Sioux City, Iowa, my first reaction was “Thanks, but no thanks.” There was no chance that I would choose a struggling diocese with no presence of the charism over one of these places that I was certain to find a home in.

To my surprise, however, there was a profound peace and attraction towards this wasteland of Northwest Iowa after this initial invitation and I lived in front of this question for a week as my friends and I attended our last CL University vacation. Where there was great conflict in my mind - wouldn’t moving to Sioux City be saying “no” to this companionship I had lived for these last few years? - there continued to be great peace and longing in my heart - somehow there was certainty that this was where He was inviting me to “come and see” once again.

I accepted the job and moved to Sioux City a few weeks later. After 10 months of driving an hour and half to the closest School of Community every week, some friends and I began meeting here (the wasteland! Of all places!) in June and it has been a constant reminder of the Father’s preference for me. Four of us in the School of Community work at this catholic high school, and just this August we began meeting with a handful of students for GS, something that only had seemed possible in some abstract future when I began my work here over a year ago.

I am in awe of the difference that Christ has made in my life since I walked these hallways eight years ago, and I am stunned by how His Presence makes all things new for those who love Him. “What is man that Thou art mindful of him, the son of man that Thou dost care for him?” I am filled with gratitude for these people that I have been entrusted to.